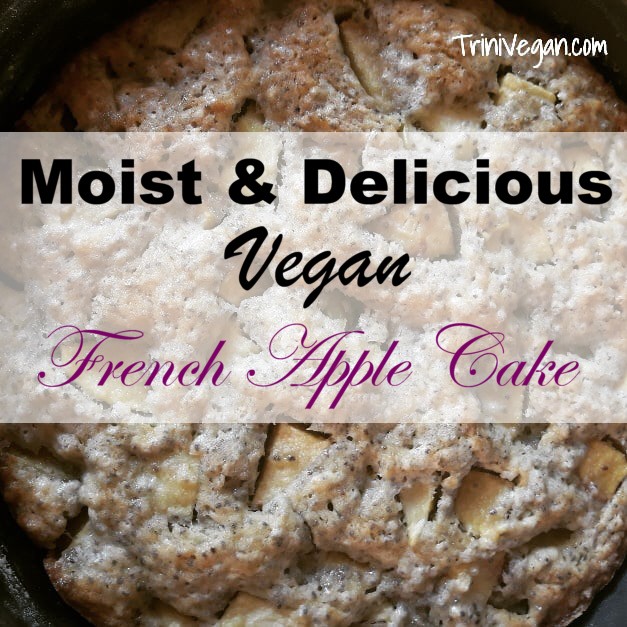 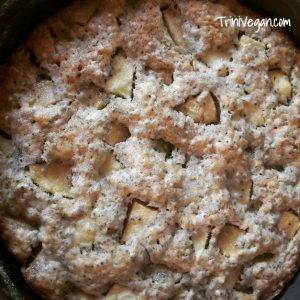 I tried to make this for the first time today and it came out great! I hope you enjoy it as much as I did. This makes enough for an 8 or 9 inch cake pan (the one you use for a layer cake) so it is going to be quite small. If you want to make it bigger, please feel free to double or triple the recipe. It is between a cake and a tart to give you an idea of how it will be. The taste: Absolutely scrumptious!

3 chia seed ‘eggs’ (to make 3 chia ‘eggs’ mix 3 tablespoons of chia seeds in a small ball and add 9 tablespoons of water. Mix and let it rest for 10 minutes until it becomes a jelly paste).

The first thing you need to do is make your 3 chia ‘eggs’ since they will take a little while to thicken up.

In a bowl, whisk together the flour, baking powder and salt. Set aside.

In another bowl, add the chia seed ‘eggs’, the sugar and the vanilla extract and whisk well for a minute or two. Forget about how it looks, I know it looks grey! It won’t look like that after baking.

In a bowl, combine the apples with the lemon juice and then add them to the flour mixture and fold them in. Spread evenly the top. You can sprinkle a little sugar on top.

Bake for around 35-40 minutes or until you insert a toothpick and come out clean. Let it cool completely before serving. You can add sprinkle  confectioners’ sugar on top or eat it as it is! 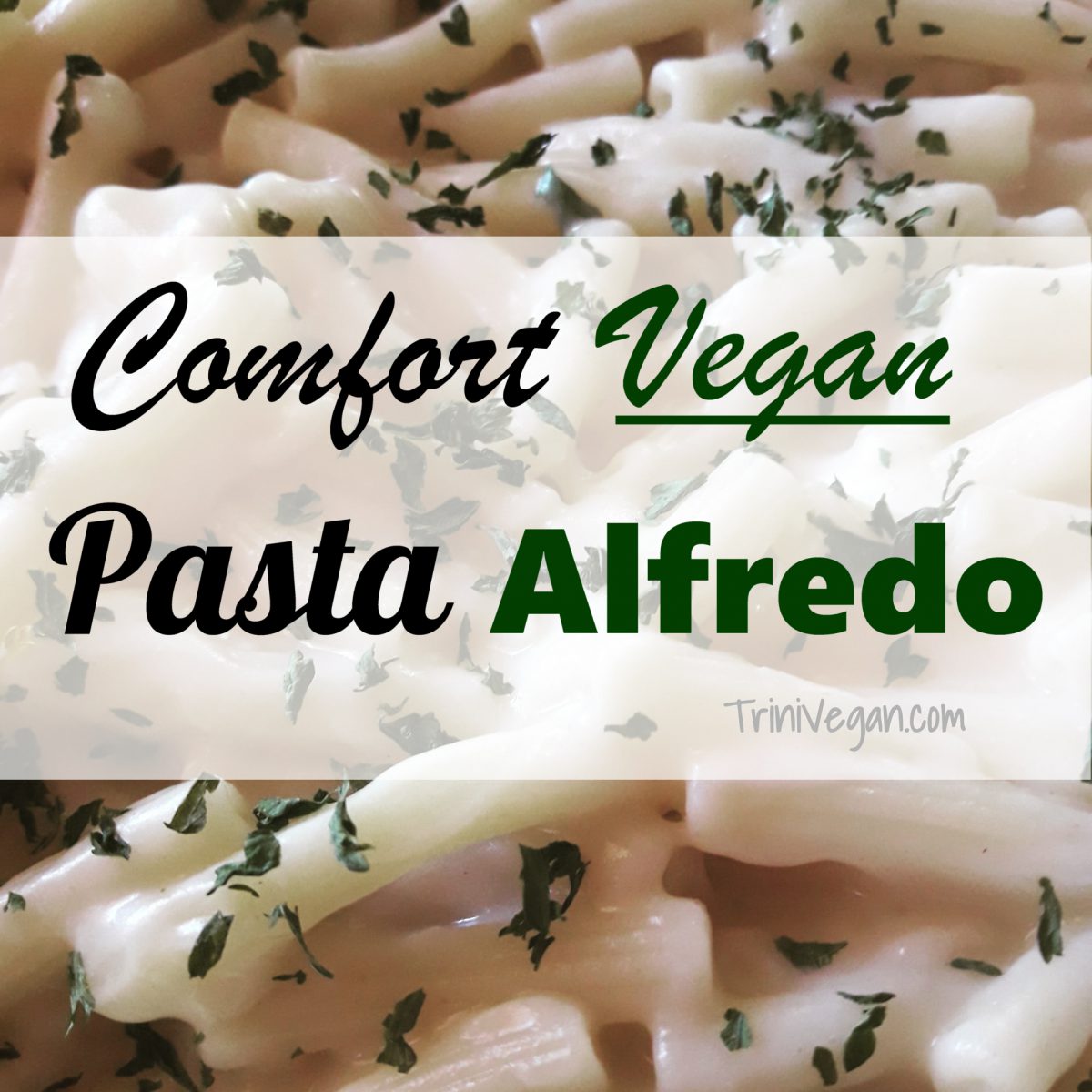 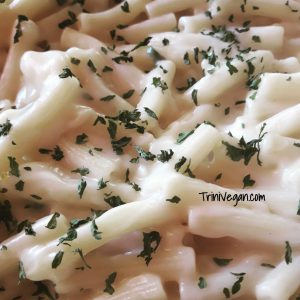 Pasta is one of my favourite foods!  I’m an Italian descendant so pasta is one of those comfort foods I grew up eating in so many different ways. However, as you know, a lot of these dishes carry cheese so how can you enjoy creamy Alfredo pasta without the cheese? Well, let me tell you it is easier than you think.

Soy milk or any other plant based milk

I usually make the sauce first and then cook the pasta so it is nice and hot. You can reserve a little pasta water when you drain it so you can use it to add creaminess to your sauce if necessary.

In a non-stick pot, on medium heat, add the margarine and let it melt. Add the garlic, mix it together and let it cook for around a minute.

Turn down the heat just a little bit and add the flour. Now, using a wooden spoon mix everything until the flour and the margarine are combined. It will look like a dough, mix constantly (don’t let it get brown) and cook it for around a minute. Then very slowly add the milk and whisk constantly. Don’t stop whisking; you want the flour to be incorporated to the milk without any lumps. I usually use around 2 cups and add them gradually but it all depends on how thin or thick you want this sauce to be. I like it a little thin because it will eventually thicken when you add the pasta. You don’t have to cook the sauce for too long. Once it is smooth you can turn it off and continue to add the milk as needed.

If for some reason, you get lumps in the sauce, don’t throw it away! Take it to the blender and let it blend for a minute or two. You will have perfect, lump-free sauce in no time. 😉 Add the dry parsley and mix everything.

Add the pasta to the sauce and fold it carefully. And there you have it, the perfect Vegan Alfredo to eat while watching your favourite show on Netflix. Yes, you deserve it! 🙂 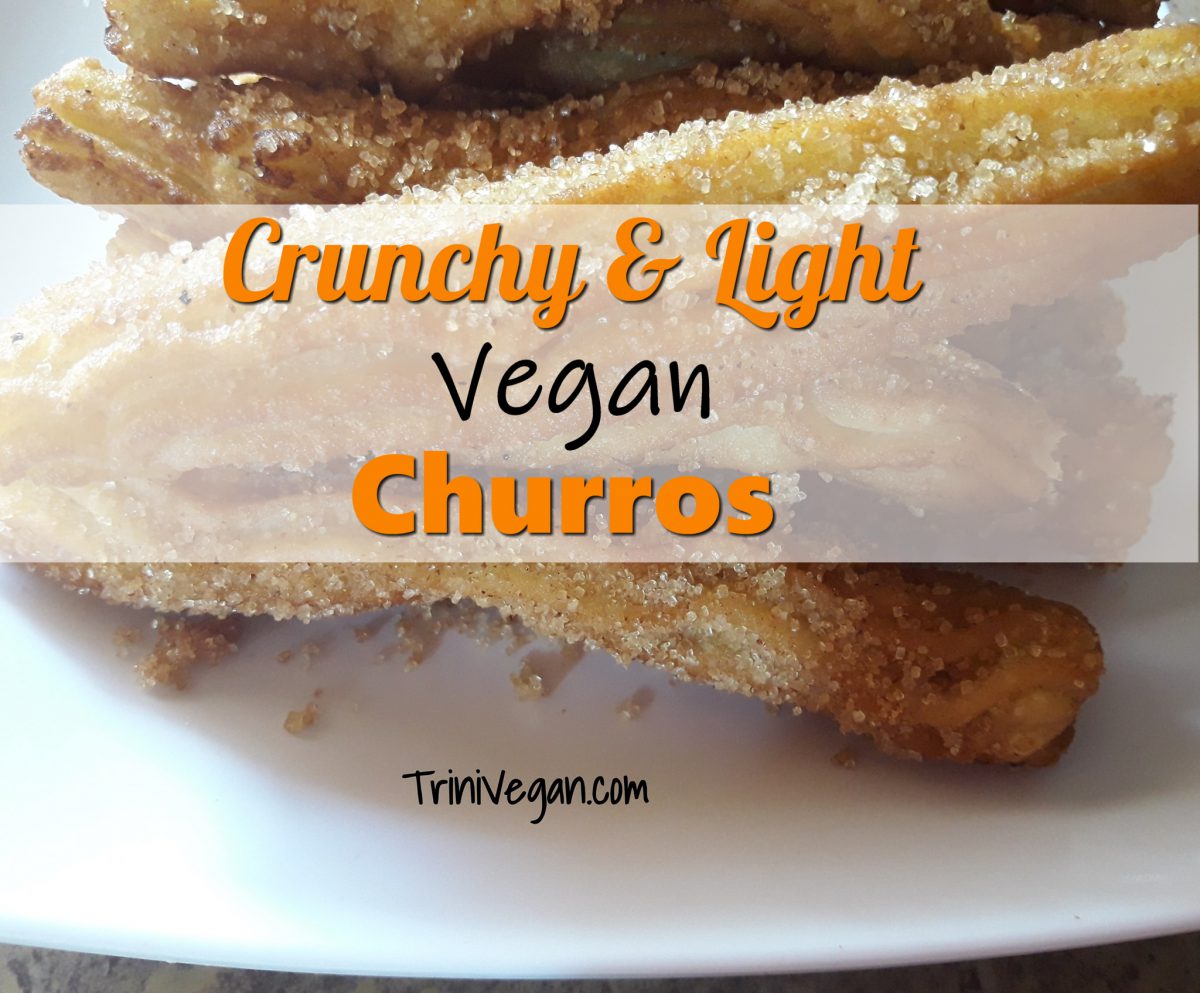 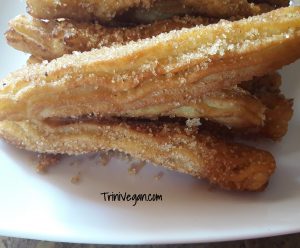 Many dispute who should take credit for the origin of churros, a delicious treat. Some people believe Spaniard Shepherds created them while others believe that the Portuguese discovered a very similar food in northern China so they copied the recipe and brought it to Europe.

Regardless, everyone can agree that churros are very delicious, no matter who first made the recipe. When growing up in Argentina, during winter times, a guy called “el churrero” (the churro guy) would pass through neighbourhoods with his bike and a huge basket full of churros to sell. Inside, they were filled with dulce de leche. I am typing this with a big smile on my face because those memories were priceless.

Well, I am not the churrera, but I have a simple, delicious, and easy recipe for Vegan churros I hope you like. A word of caution! When frying them, please stay very far from the oil. Churros can be sneaky and they can explode if you don’t know what you are doing so… try to be as far from the stove as much as you can. However, I didn’t have any issue when I made them. Let’s start!

For the coating: ½ cup of granulated sugar and 2-3 teaspoons of cinnamon.

In a small sauce pan (medium heat) add the water, margarine and sugar. Using a whisk or spatula combine everything and bring it to a boil. Once the water is boiled, turn off the heat.

Then add the flour and start mixing everything until it forms a big and smooth ball (it will leave the sides of the pan and the bottom too).  Transfer the dough into a plate or counter and let it cool for a few minutes, you want to work with this dough while warmish but not cold. Once you are able to touch it without getting burned, start kneading it for a couple of minutes.

Add the dough into a piping bag with a start-shaped nozzle and start piping them out. Let them rest for a few minutes before frying them. After they are nice and brown, remove them from the oil and roll them into the sugar and cinnamon mixture. Voila, you have Vegan homemade churros. Enjoy!